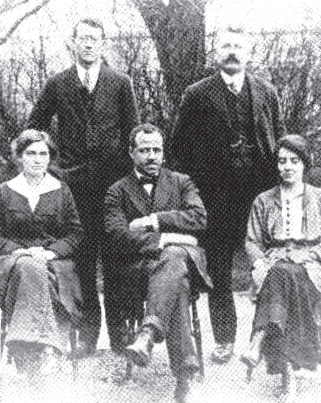 Ernest Goffe was born in Port Maria, Jamaica, on 12th September 1867, the youngest son of a merchant and planter. His family had come to Jamaica from Barbados in 1823. The family claim (without positive proof ) to be descended from one of Cromwell’s major-generals William Goffe – who signed King Charles I’s death warrant.

“Ernest Goffe came to London in 1889 to study medicine at University College Hospital. A keen sportsman he was “victor ludorum” (games champion) at the hospital, played rugby for Rosslyn Park and was a referee for the new sport of women’s hockey. He was a member of the Fabian Society, a group later attached to the Labour Party. After qualifying as a doctor he worked as a GP and at St Ann’s General Hospital (earlier called the North Eastern Fever Hospital Tottenham where in the First World War he treated many wounded soldiers

“The black presence is not always as clearly identified in British records. From 1850 a steady stream of medical students from Sierra Leone and the West Indies qualified in England and Scotland, working in hospitals during and after qualifying, and sometimes establishing practices. Jamaican-born doctors Ernest Goffe, Harold Moody,

Ivan Shirley, J.J. Brown and H.E. Bond all had medical practices in London in the inter-war years, while John Alcindor practiced in London from 1899 to 1924.

Residents are encouraged to come forward and nominate someone who has helped them the most during the outbreak – it could be a volunteer, a bus driver, their local GP surgery a family member or someone who has gone the extra mile to brighten up a neighbour’s day.