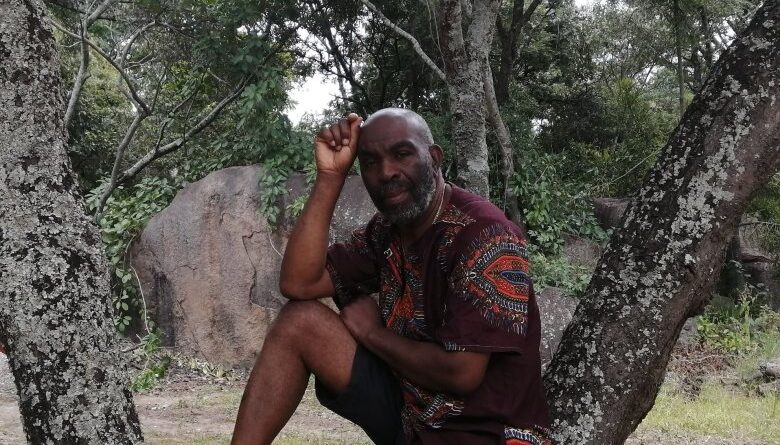 The British Barbadian Award winning Filmmaker has died age 67 in Zimbabwe, according to sources he died on 28 June, cause of death is not public. Menelik Shabazz was an Award winning film director, producer, and writer – a key pioneer in the development of contemporary black British cinema. Born in 1954 he produced for Channel 4 drama Big George is Dead (​1983), directed by Henry Martin, and the documentary I am Not Two Islands. He was born in St. John, Barbados and he had lived in the UK since the age of five.  From an early age Menelik watched mobile cinema in his village in #Barbados, but didn’t entertain the idea of making films until his teen years. This was when he was introduced to the first portable video technology whilst studying at North London College.

Filmmaker Francis-Anne Solomon said. “He was a legend, not just for his films but his festival, bfm magazine, his activism and his take no prisoners approach to the obstacles he faced in the industry. He held the vision of Black filmmaking alive when most had to leave the business because there was no place for us (black filmmakers) in it. He leaned in and kept going, all power to his determined spirit”.

This revolutionary technology, the Sony port-a-pack, demystified filmmaking and made the filmmaking process accessible.  Thereafter, Menelik enrolled at the London International Film School. Unfortunately, he was only able to attend for a short period, as his local Borough Council Haringey refused to give him the ‘discretionary grant’ required. However within that short period, he was able to grasp important knowledge, confidence and inspiration to move forward as a filmmaker.

Menelik is best known for his acclaimed debut feature Burning An Illusion, which won the Grand Prix at the Amien International Film Festival in 1982. The film also won the lead actress, Cassie Macfarlane, the Evening Standard Award for ‘Promising Actress’(1982). Burning An Illusion was only the second feature film by a black director produced in the UK. The film continues to be shown today on media courses at Universities and Colleges and has become a cult classic.

Step Forward Youth and Breaking Point
In 1976 Shabazz directed Step Forward Youth, a 30-minute documentary about London-born black youths, after which he worked in commercial television, directing Breaking Point (for ATV, 1978), which was shown on prime time TV and contributed to the repeal of the Sus law that was being used to criminalize Black youth.

His first feature-length film Burning an Illusion, which he wrote and directed, with financial support from the British Film Institute (BFI), was released to acclaim in 1981 and has been called “one of the most important feature films ever made in Britain”. About a young woman’s love life, and mostly shot in London’s Notting Hill and Ladbroke Grove communities, it was “the first British film to give a black woman a voice of any kind.” It was only the second British feature to have been made by a black director, following Horace Ové’s 1975 Pressure. Burning an Illusion won the Grand Prix at the Amiens International Film Festival in France, and its star Cassie McFarlane won the Evening Standard Award for “Most Promising New Actress”.https://www.youtube.com/embed/62Ige8YflPs?version=3&rel=1&showsearch=0&showinfo=1&iv_load_policy=1&fs=1&hl=en-US&autohide=2&wmode=transparent

Menelik, along with other individuals, founded Ceddo Film Video Workshop in 1982. It was Menelik’s vision to empower black film production, training and film screenings. Funded by Channel Four and the British Film Institute, Ceddo createdgroundbreaking film production and community training initiatives, and hosted a number of screenings with filmmakers including Spike Lee ( School Daze).

Charles Thompson CEO & Founder at SCREEN NATION AWARDS commented. “Shabazz was my mentor, friend, partner and brother. From Ceddo, through bfm and countless film projects I’m proud to have been included in his story. He was a one-off visionary African with beautiful crazy ideas, just the type I always had time for. He now stands amongst the Ancestors with the legacy that will live forever”.

Despite attempts to produce further drama projects, Menelik was unable to raise funding from within the film and television industry. In frustration, he withdrew from filmmaking in 1998. Menelik then channelled his energies into publishing Black Filmmaker (bfm) magazine to assist the next generation of  filmmakers. The publication was the first of its kind and was distributed in UK nationally, as well as to readers in Europe and North America. The publication lasted nine years.

Black Filmmaker Magazine and bfm International Film Festival
In 1998, Shabazz founded Black Filmmaker Magazine (bfm), the first black film publication aimed at the global black filmmaking industry, and over the next decade the publication was distributed in Europe and the US.] In 1999 he started the bfm International Film Festival as a platform for screening black world cinema and to inspire British talent, which became the biggest of its kind in Europe.[ As he has said: “BFM was the outcome of my frustrations in the film industry. I wanted to channel that anger into something positive which initially started as a magazine (Black Filmmaker) and the intention to pass on information to the next generation about the film industry. One thing that was happening at the time was a lack of young people entering into the industry on a consistent level. The magazine was an interface between industry and filmmakers and out of the initiative developed the Black Filmmaker International Film Festival.

A foundation template for the screening of black cinema, inspiring future generations, the bfm International Film Festival became the biggest of its kind in Europe and lasted eleven years.

Professor Dr. Lez Henry who appeared in Shabazz’s documentary Looking for Love stated. “I was heartbroken and saddened to hear of the transition of our beloved brother Menelik Shabazz. He was the pioneering figure of black British film and his works remain unparalleled to this day, despite all of the accolades many film makers are currently receiving for what I deem to be ‘safe’ and compromised contributions, that do little to address the historical reality of the black experience in Britain. I state this because when he released his works he was literally fighting against the most blatant and pernicious forms of white supremacist thought and action; that which blighted and threatened our very existence during the 70s and 80s on a daily basis. Brother Menelik challenged systemic and institutionalised racism head on without compromise and that is why I used the following quote from our brother to open the reasoning in my 2006 book ‘What the Deejay Said: A critique from the street’.

“Burning an illusion for me was the recognition of self. Black people in this society have become almost emasculated from who they are. They have become separated and caught up in kind of thinking that in order for them to become; they had to become somebody else. They had to kind of put on a mask and that mask would become who they are. And what’s happening in that process is that you then lose your self and then you also become disconnected from reality…whether it’s a male or it’s a female… in order to be true to who you are, in order to be realistic in terms of how you see your relationship with each other you have to first know yourself. You have to come to that point because without that everything else is an illusion”.  Menelik Shabazz

The above quote from Menelik Shabazz (2005), Director of Burning An Illusion (1981) and Blood Ah Goh Run (1982), is lifted from the 2005 DVD release of these films that represent a seminal moment in the black British social, cultural and political experience. These films perfectly capture what it was like to be considered an unwanted worthless nigger, other, in the land of your birth and how this reality impacted on wider community relations during that historical moment. That was/is the reality Shabazz speaks of when suggesting black people can only ‘burn the illusion’ when alternative knowledge of self is used as the fuel for the fire. This book is forged in the fire and spirit of his libratory perspective and will present notions of resistance and transcendence that are missing from many accounts that sought to explain OUR behaviour during the ‘crisis’ period of the early 1970s – mid 1980s”. Rest peacefully with the ancestors beloved Menelik as you have left us with your great works and as such you live on.
Prof Lez Henry

In 2007, Menelik went to Nigeria to work with investors to produce film projects in the burgeoning industry known as Nollywood. This experience lasted only eight months but the experience and  change of scenery rekindled the passion in Menelik to return to filmmaking. The digital technology experience in Nigeria offered a way back into filmmaking on his own terms.

In 2008 started to film a feature length documentary project that became known as  The Story of Lover’s Rock.  It became one of the highest grossing documentaries in UK cinemas in 2011. It also won the Jury award for Best Documentary at the Trinidad International Film Festival in 2012.

Menelik’s story continued with an acclaimed documentary Looking For Love, a film which looks at black male/female relationships in the UK. Menelik has recently developed a dramatic TV pilot for a series set in Barbados called HEAT.

British Film Director Clare Anyiam-Osigwe said “Menelik’s work was made known to me by my husband, Emmanuel Anyiam-Osigwe back in 2014, when we started dating. I watched Burning An Illusion and felt like I’d found my British equivalent to Spike Lee. I understood how rich yet complex Black British story telling can be, especially when the narrative escapes the mediocrity of crime and poverty or period drama. Romantic drama is my genre & because he walked, I have tried to run, since my debut with No Shade. They say Black love isn’t marketable. They say it’s not profitable. Well, we never needed their permission, we just need to honour our own whilst they’re here to receive their flowers. That spirit is the foundation of BUFF and the cornerstone of everything we do. It is the values that Menelik instilled in Emmanuel 20 years ago when Emmanuel interned at BFM. Rest in power Menelik. Thank you for the mentorship and bravery”.

His most recent film release was a documentary called Pharaohs Unveiled which explores Kemetic history, spirituality and psychic channelling.  His work has spanned 45 years.