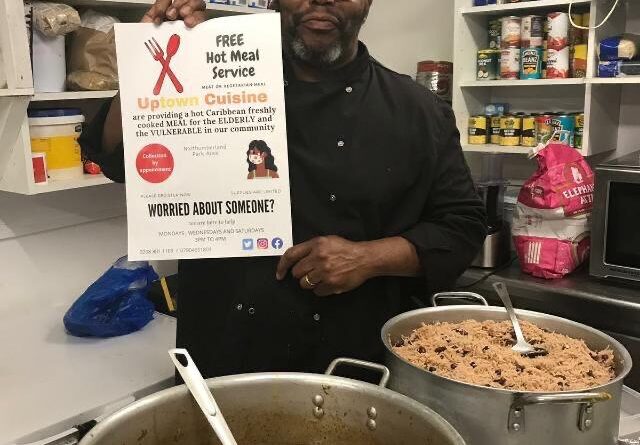 The COVID- 19 pandemic have both exposed and exacerbates the level food poverty in the UK, particularly in economically deprived areas of London. This is reflected in the number of food banks and hot meal services in communities most affected by this social challenge. In Tottenham , north London, there are 10 such facilities.

Food poverty can be caused many reasons: low income; complete loss of income; an inability to access public funds or could be a matter of affordability ;older people on their own who cannot adequately prepare meals; the list goes on.

In the UK, several community organisations, charities and local councils have stepped in to help. One such charity is Impact Cuisine started by Jeffrey Simon. It is located at Uptown Cuisine located at Park Lane ,Tottenham, N17, just 10 minutes’ walk from Tottenham Hotspur Stadium. Its concept is threefold. It provides hot meals three times a week to people in their homes; people in the community can collect hot meals (cooked on site) and also pick up groceries from ‘the market’ set up outside the restaurant.

The opportunity to start came in June 2020 when another organisation Mr Simon volunteered for folded. Mr Simon, proprietor
of Uptown Cuisine, the base for his charity, outlined his motivation behind initiative :
“The organisation I volunteered for was supplying 400 meals a day and other volunteers taking them out(to people’s home). It stopped prematurely and the demand was still there. I decided to take up the mantle. It was the pandemic; I couldn’t leave people without a meal. People in that organisation was very supportive in helping to set it up. We sought out the most vulnerable from the database and sought others with others from the local community. Since we started ,we served over 18,000 meals . It has grown from strength to strength and people appreciate it”

On food poverty, Mr Simon states: “ It was shocking to see. You are talking about London. the United Kingdom. What see taking place are things we normally associate with ‘third world countries. It’s an eye opener to know that because of this pandemic, it opened up a pandora’s box where you could see that there are people out there living on ‘hand to mouth’. People across London and the UK are vesting food banks because it is helping them out. The pandemic has also revealed a new side of the United Kingdom … a vulnerability that makes people forget their pride. Even working people going to food banks. It has also created a unity between communities .I have seen a difference in the Motherland Park community in the last 10 months.”