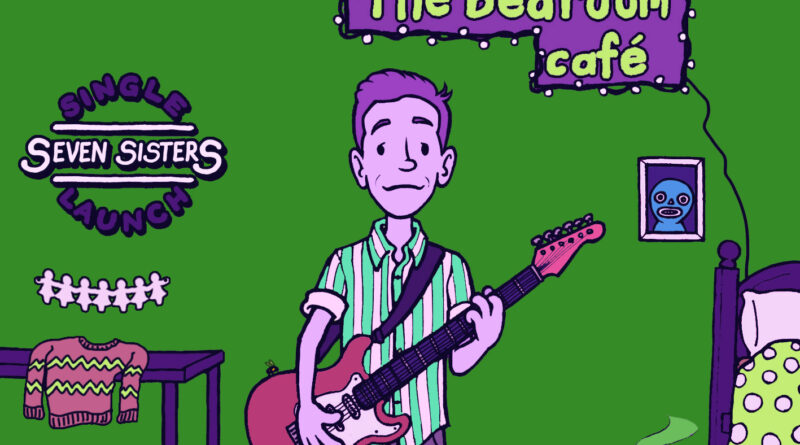 Ben shares his colourful lockdown creative project which includes original online single release ‘Seven Sisters’
I recorded an album in January called ‘The Adventures of Yesterday’ – the concept of the record follows the fictional
character ‘Yesterday’, his friend ‘The Princess of Troy’ and the evil ‘Lord of Chaos’. I wrote the record to promote my
belief that cynicism is the death of creative thought and used childlike characters and storytelling as I find them a very uncynical and simple way of
communicating ideas.

The album was finished and I was in the process of planning a public launch event when COVID 19 hit and the UK went into Lockdown. Rather than wait for the uncertain future of live music in London, I created a makeshift venue at home I called it ‘the bedroom café’ and live-streamed gigs on Instagram.

I released one song from the record each week and commissioned the artist Maja Lieselotte (@majalieselotte) to draw thesingle cover art whilst I asked the artist Spike Zephaniah Stevenson (@spike_zephaniah) to make posters to promote the gigs. Both artists were chosen because of the fun and childlike nature of their art that was in keeping with the theme of the record.
Having released all the songs I staged an exhibition of the single covers and gig
posters made for the album at the Lordship Hub. This exhibition will move to Paperdress Vintage in Hackney on 25th October where I will be having a socially distanced album launch and playing live.

All the songs for this album were recorded in Mattison Studio, situated just off Green Lanes in Tottenham, with Record Producer and Engineer Julien
Baraness. He played the guitar on the record and provided
musical arrangements for the songs.

You can find the track Seven Sisters here:
https://open.spotify.com/track/4rgjhBeXAhSu6W1mZ0
OkXC?si=rOPyPXP5TmmMv-CpCdF09Q